Cayman Islands experiences a tropical marine climate, so expats can always expect warm weather. Temperatures rarely drop below the mid-70s (25°C) year round and there are two main seasons, dry and wet, with rainfall throughout the year.

Dry season temperatures hover in the mid-70s (25°C) and there is always rain. It is the most popular season on the islands because of the hot, sunny weather, but the humidity can be overwhelming and some find the heat oppressive.

Few people come in the rainy season because of the impending danger of hurricane season. However, it is the warmest time of year and often reaches well into the 90s (30°C).

Expect thunderstorms, tropical rains and hurricanes come June/July. While severe hurricanes have caused property damage, flooding and power cuts, there has been little injury due to the effective storm warning systems, emergency services and disaster preparations. There have been earthquakes in recent years, but there has been little damage and no injuries as a result. 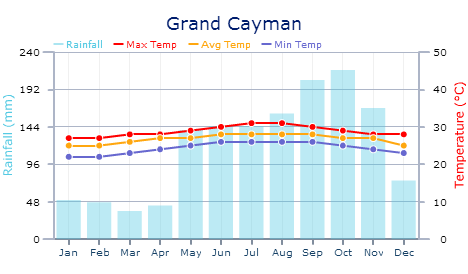 Are you an expat living in Cayman Islands?

Expat Arrivals is looking for locals to contribute to this guide, and answer forum questions from others planning their move to Cayman Islands. Please contact us if you'd like to contribute.