For expats moving to Uzbekistan, the country's desert sands and awe-inspiring mountain peaks make for a fascinating landscape to explore. While it may not the most conventional of expat destinations, Uzbekistan certainly has its own unique brand of charm and can offer an interesting and enlightening stay for the open-minded.

Living in Uzbekistan as an expat

Though the expat community in Uzbekistan is relatively small, the country's strong economy continues to draw foreigners looking for career progression. Thanks to the Uzbek government’s efforts, the country's GDP is steadily increasing year by year. The main drivers of the Uzbek economy are gas, oil and gold, and most expats work as senior management professionals in one of these industries.

The official language of the country is Uzbek, although Russian is also spoken by some. Few Uzbek people speak fluent English, so a basic knowledge of Uzbek or Russian is recommended. Those planning on living in Uzbekistan for an extended period should consider enrolling in a local language course to make the transition smoother.

While most Uzbeks are Muslim, Uzbekistan is a very tolerant nation, so expats shouldn’t have any difficulties practising their religion freely here. Regardless, expats should always demonstrate respect for local etiquette and should dress modestly.

Cost of living in Uzbekistan

The cost of living in Uzbekistan is one of its most appealing attributes. Compared to Europe or the US, life in Uzbekistan costs a fraction of the price, though it is slightly more expensive than some other Central Asian countries such as Kyrgyzstan and Tajikistan.

Excellent and well-priced fresh produce can be found in local markets, and eating out also offers good value for money.

The arid continental climate in Uzbekistan can be trying, especially during winter when temperatures seem to hover around freezing. Thick, cosy coats are the order of the day at this time of year. Meanwhile, summers in Tashkent can be hot and expats should take care to keep cool as the temperature can climb up to 96°F (36°C) at its peak.

Expat families relocating to Uzbekistan with children should keep in mind that there are only a handful of international schools in the country, most of which are located in Tashkent.

Healthcare in Uzbekistan isn't on par with standards in Western Europe or North America and there's a serious shortage of doctors and medical facilities. While the Uzbek government is trying to reform the medical system, it's best for expats to seek treatment in private hospitals. Many expats travel abroad for more complex medical procedures.

While there is no doubt that Uzbekistan is firmly off the beaten path, its starkly beautiful landscape and welcoming local population have much to offer expats looking for something different.

Geography: Uzbekistan is primarily comprised of desert terrain with some mountainous areas.

Money: The local currency is the Uzbekistani som (UZS). Uzbekistan is still very much a cash-based society, so bank cards are not commonly used.

Tipping: It isn't common or expected to tip in Uzbekistan. Some upmarket restaurants may add a 10 percent service fee to the bill.

Electricity: 220V 50Hz. Plugs with two rounded pins are used throughout the country.

Transport and driving: Cars drive on the right-hand side of the road in Uzbekistan. In Tashkent, local public transport consists of taxis, buses, trolleybuses, trams and trains.

► Learn about Education and Schools in Uzebekistan

"There are plenty of interesting things to see and learn about Uzbekistan. Come with an open-minded and without judgements. And most importantly enjoy it!" Read more of our expat interview with Rachael from Northern Ireland.

Are you an expat living in Uzbekistan?

Expat Arrivals is looking for locals to contribute to this guide, and answer forum questions from others planning their move to Uzbekistan. Please contact us if you'd like to contribute. 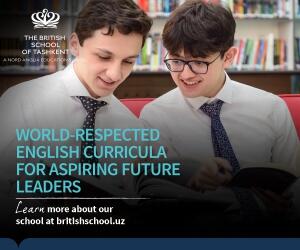