Denmark has a mild, temperate climate with short summers and long winters when temperatures can drop below freezing.

The summer months are between June and August with the warmest month being July. Temperatures are usually mild with the average being around 20°C (68°F).

Winter runs from December to March with temperatures hovering around 0°C (32°F). Frost and snow are common during winter, so it's best to bundle up with warm clothes to avoid a chill.

Strong winds blow throughout Denmark on a near-constant basis; these winds are utilised in Denmark's wind power industry amd produce nearly half of the country's electricity. 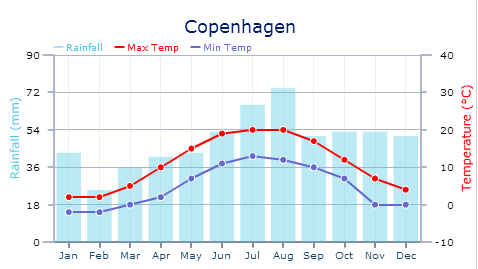 ►Brush up on the basics with Essential Info for Denmark

Are you an expat living in Denmark?

Expat Arrivals is looking for locals to contribute to this guide, and answer forum questions from others planning their move to Denmark. Please contact us if you'd like to contribute.