Estonia has a mix of maritime and continental climatic conditions. It is far more moderate than other countries at this latitude and it rains or snows for approximately a third of the year. The seasons in Estonia are distinct and are nearly equal in length.

Spring is a mild and dry season lasting from April to May. May is favoured for its warm, mild and dry weather, made especially pleasant by the abundance of flora and wildlife emerging from the forests and plains. Summer lasts from late May until mid-September and is typically around 70°F (20°C), although it may occasionally reach over 85°F (30°C). Thunderstorms are very common and many evenings end with rain.

Autumn’s wet and windy days are in full force by October and, apart from being the wettest month, November also ushers in the winter snowfall. Temperatures remain below 50°F (10°C) and drop below 32°F (0°C) by November.

Winter temperatures may drop below 0°F (-18°C), but remain at around 32°F (0°C), and it snows continually. This is a popular month for snow sports and activities.

Cyclones from the Baltic Sea have been known to cause severe thunderstorms in Estonia, often resulting in power cuts, flooding and property damage. Heavy snowfall and blizzards have also become common in recent years. 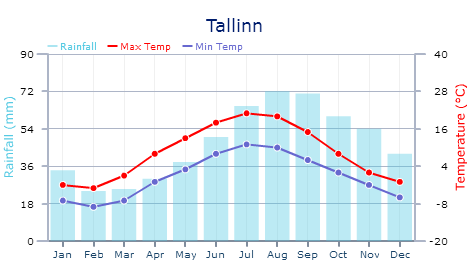 ►See Moving to Estonia for an overview of the country.

Are you an expat living in Estonia?

Expat Arrivals is looking for locals to contribute to this guide, and answer forum questions from others planning their move to Estonia. Please contact us if you'd like to contribute.