Locals often remark that one can experience four seasons over the course of a single day in Cape Town. The city's constantly fluctuating weather makes it tricky to predict – nevertheless, each season has its own distinctive characteristics.

Summer is from December to February and is often characterised by a strong southeasterly gust known as the 'Cape Doctor' or simply 'the South Easter'. Temperatures peak in mid-February before gradually dipping as the city eases into autumn. Winters receive frequent cold fronts and storms with lashing rain and powerful winds.

The amount of sunlight the city receives varies significantly throughout the year. In late December, the sun can set as late as 8pm and rise as early 5.30am. By contrast, it often only rises after 7am at the height of winter and can set as early as 6pm. 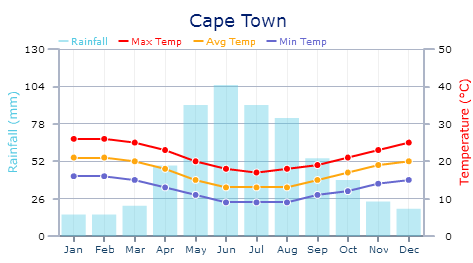 Are you an expat living in Cape Town?

Expat Arrivals is looking for locals to contribute to this guide, and answer forum questions from others planning their move to Cape Town. Please contact us if you'd like to contribute.