The climate in Cambodia is typical of the tropics in Asia. The rainy season occurs between May and October, with relatively cool temperatures and high humidity levels. The dry season between November and April sees temperatures peaking at around 104°F (40°C) by its close.

The wettest months in Cambodia are during September and October when the moist winds blowing in from the Gulf of Thailand and Indian Ocean dump heavy showers on the country. The rain usually arrives in the afternoon and downpours last only an hour or two. The driest months are January and February. 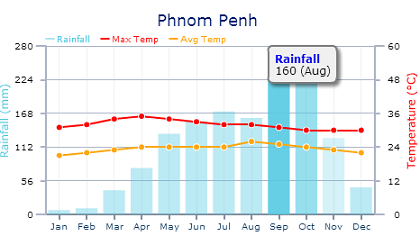 ►For information on the schooling system, see Education and Schools in Cambodia

Are you an expat living in Cambodia?

Expat Arrivals is looking for locals to contribute to this guide, and answer forum questions from others planning their move to Cambodia. Please contact us if you'd like to contribute.