Education and Schools in Doha

Education in Doha is of a world-class standard and is more than adequate for most expats. A wide range of private international schools in Doha are available, which cater to a variety of needs and follow various curricula from all over the world, including British, American, French and German.

While there are Qatari schools in Doha which expat children are eligible to attend, most parents opt to send their children to international schools because these offer a smoother transition for those accustomed to studying a particular curriculum from their home country. Some expat parents in Doha prefer homeschooling, although legislation on this issue is fairly ambiguous, which presents its own challenges.

Public schools in Qatar receive government funding and provide free tuition to all eligible residents. Most students are Qatari, although expats with the right connections might find they can secure a place. The quality of education at these schools is excellent and they are a good option for expats who are looking to settle down in Qatar in the long-term and want their children to be integrated into Qatari society.

Even though standards of local schools are very good, most expat children attend private international schools in Qatar. There are various curricula, including the International Baccalaureate (IB), British, American and Indian systems. Most families choose a curriculum similar to the one in their home country, while expats who move frequently often prefer the IB curriculum.

When choosing a school, expat parents have to consider travel times and whether their children’s qualifications will be internationally recognised. Rush hour in Qatar means that children can spend hours travelling to and from school, and not all schools provide a bus service. Living close to school makes it easier on expat kids and their parents.

Expats should also make sure that a school is accredited by Qatar National School Accreditation (QNSA) and recognised in their home country.

Education in Doha can be a significant expense, so expats should try and negotiate school fees into their contract or ensure that they budget carefully. Enrolment requires long-term planning because waiting lists for spaces in schools can be long. Some expats secure places for their children in a school before signing their employment contract, since some companies reserve spaces in schools.

Expats applying to a school can expect to pay a non-refundable application fee. They will need to fill out an application and provide previous school documents, their child's health history, and physical exam results. Some schools also require a letter of recommendation, on-site entrance exams and a language test. After enrolment, expats may also need to give copies of the student’s residence permit, passport copies, photos and immunisation records, as well as copies of their residence permits.

Some parents avoid the admissions process and decide on homeschooling in Qatar. Doha Home Educators (DHE) has been pivotal in creating an organised network for homeschoolers in Doha, and regularly organises classroom lessons, activities and events. Given the vague homeschooling regulations for expatriates in Qatar, DHE advises parents to follow the regulations of their home country. 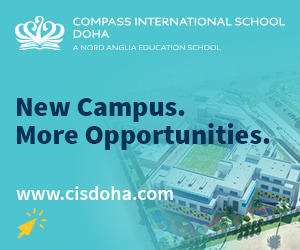