For expats seeking warm, sunny days, Mozambique may turn out to be paradise. The average yearly temperature in Mozambique is a balmy 82°F (28°C). The country gets lots of sunshine all through the year and rarely gets cold.

The climate varies slightly according to the region. The coast experiences a sub-tropical climate. It becomes more tropical the further north one goes. Temperatures and rainfall patterns also vary between the different regions. The northeastern coast of Mozambique is the hottest and most humid. Because of high altitudes, the regions in the Nampula and Niassa provinces are the coolest. Conditions along the coast can be oppressively hot and humid.

Mozambique's weather is characterised by two seasons. The hot rainy season runs from December to March. The average temperature along the coast for this season is 88°F (29°C). Rainfall is heavy along the coast and decreases in the north and south. During the rainy season, Mozambique also experiences cyclones. Though these cyclones are rarely powerful, they can cause a lot of damage. The dry season is from April to November.

The weather in Maputo, Mozambique's capital and most popular expat destination, is hot and sunny. February is the hottest month and June the coldest. Winters tend to still be warm with temperatures rarely dipping below 65°F (19°C). 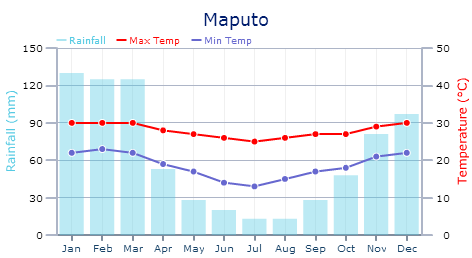 ►For information about healthcare, see Healthcare in Mozambique

►For more on getting around, see Transport and driving in Mozambique

Are you an expat living in Mozambique?

Expat Arrivals is looking for locals to contribute to this guide, and answer forum questions from others planning their move to Mozambique. Please contact us if you'd like to contribute.