Expats can expect the weather in Mumbai to be consistently hot and humid. Temperatures in the city remain relatively stable throughout the year, and the mercury never seems to stray far from 86°F (30°C). Expats unused to such heat and humidity should take care to stay hydrated and remain indoors during the hottest hours of the day.

Seasons in Mumbai are largely determined by rainfall, with the monsoon season typically lasting from June to September. During this period, it usually rains daily and cloud cover is nearly constant. Winter begins shortly after the monsoon season, from December to February. Summer is from March to June. 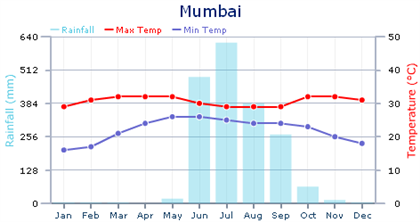 ►Learn more about moving to Mumbai