Due to its vast size, the climate of Kazakhstan is varied. Generally, however, the country has a continental climate. Summers are hot, while winters go to the other extreme and are typically extremely cold with large amounts of snowfall. Kazakhstan has such diverse climactic conditions that the north can be covered in thick snow while the south begins its agricultural season.

Springtime may come as early as February in the south, but typically lasts from March to early June. Temperatures remain below 50°F (10°C) in early spring and rise above 70°F (20°C) by June.

Summer, from June to early September, can be stiflingly hot with temperatures rising well above 90°F (30°C).

Autumn lasts from September to November and brings cloudy and windy days. Snowfall may begin in mid-Autumn and temperatures begin to drop below freezing in some areas.

January is the coldest month, and winter temperatures can reach extreme lows dropping to -6°F (-21°C) or less. Snowfall is thick and falls throughout Kazakhstan during this time of year. The extreme low temperatures and heavy snowfall make this a dangerous period. Winter is a particularly harsh time of year and it is important to pay attention to weather warnings. Flooding, snowstorms and blizzards are all possible during this time so expats should be on the lookout for any government communication regarding this. 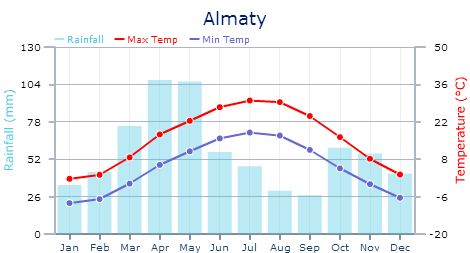