Romania has a continental climate with distinct seasons including mild springs, sunny summers, temperate autumns and chilly winters. Expats moving to Romania will be able to practice their skiing in winter. Snowfall is typical from December through to March throughout the country. Winter temperatures vary in the daytime from 32°F (0°C) to 41°F (5°C), with the potential for heavy winds which further increases discomfiture.

Spring, which is from the end of March through to June, has cool mornings and nights. Spring gives way to Summer near the end of June, when the weather becomes warmer, with the country experiencing some rain. Generally, expats can look forward to summers spent in the sun, enjoying the Romanian countryside. Especially as daily temperatures range between 77°F (25°C) and 86°F (30°C).

Finally, autumn begins at the end of September, bringing both cool and dry weather. 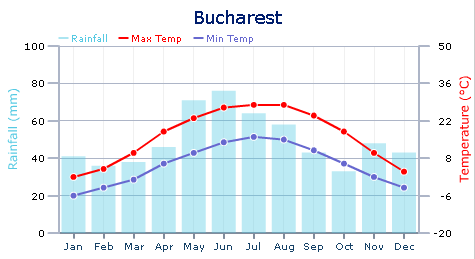 ►For information about adjusting to life in the country, read Culture Shock in Romania

►For information about telecommunications in the country, read Keeping in Touch in Romania

Are you an expat living in Romania?

Expat Arrivals is looking for locals to contribute to this guide, and answer forum questions from others planning their move to Romania. Please contact us if you'd like to contribute.