Cost of Living in Buenos Aires 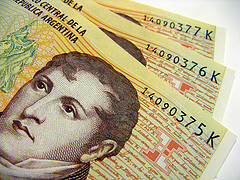 The cost of living in Buenos Aires is above average compared to most large cities. However, the Argentinian economy does have a tendency to fluctuate and inflation is very unstable.
Buenos Aires ranked 41st out of 207 cities in the 2016 Mercer Cost of Living Survey, placing it as more expensive than Sydney and Paris, but cheaper than London and New York City.

Cost of accommodation and utilities in Buenos Aires

Accommodation in Buenos Aires can be very expensive when compared to other cities.
Expats should be aware that if they choose to rent in Argentina they will pay much more than what a local would. Expats will be required to provide a few months’ rent in advance and will also need a guarantor. New arrivals can expect to budget about 20 percent of their income for accommodation.
Electricity is relatively inexpensive and the government subsidises it by 40 percent.

Argentina no longer has its own automobile industry, making cars very expensive in the country as import tax is 50 percent. Expats, however, will find that there are good quality second-hand cars available.
Buenos Aires also has an extensive and affordable public transport system that offers a good way to travel around the city.

Cost of schooling in Buenos Aires

Public education in Buenos Aires is inexpensive compared to other large cities. However, international schools, the option most expats choose, can be very expensive.

Cost of food and clothing in Buenos Aires

Many expats find health insurance in Argentina to be inexpensive. General healthcare costs for things like visits to the doctor, hospital stays and non-prescription medicines are very low.

Food and clothing costs in Argentina


Supermarket prices for certain items are the same as in the UK and in many cases higher, as it is rare to find the sort of economy of scale deals that one would get in Europe and the States – the ‘two for the price of one’ type offers. If you have the time to shop around, particularly for fruit and vegetables, which are much cheaper from the roadside stalls, you can bring your grocery bill down; but this can be time-consuming and expats tend to follow the ‘one shop a week’ pattern rather than the daily food shop that the locals are used to.

Clothes are cheaper in Buenos Aires, but note that there is much more of a variety in the city than in the rural areas to the west of the capital.

Prices may vary depending on location and service provider. The table below is based on average prices for September 2016.

►For more about about moving to the Argentina capital see Working in Buenos Aires.