Expats may be surprised to find that Norway is not soul-destroyingly cold all year round. Despite its northerly location, the coastal climate in Norway is temperate, thanks to the warming effects of the Gulf Stream flowing along its coast. Summer occurs between late June and early August, and brings pleasantly mild days with temperatures reaching 22 °C (72°F), and sea temperatures a comfortable 64°F (18°C).

In winter, much of Norway is snow-clad with very low temperatures in the north and the low-lying inland regions of the south. Temperatures can drop below -40°F (-40°C). In contrast, the coast enjoys milder winters, although gales and rain are common. In spring, between May and mid-June, Norway is at its prettiest, with everything coming to life and blossoming, and melting snow swelling the waterfalls. 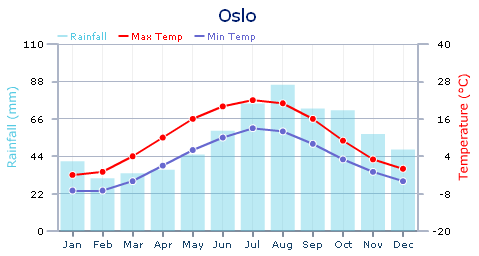 ►For tips on surviving life in Norway during the cold months, see Surviving Winter in Norway.

►Got Light? Sunlight in Norway explains exactly what to expect in Norway from an expat perspective.