Interview with Las – an Irish expat who lived in Houston

Lasairiona – Las for short – is a 30-something, Irish expat. As of November 2019, she’s repatriated to Northern Ireland after spending almost the entire last decade living abroad. She spent nearly eight years in Houston, Texas and 18 months living in Pune, India. She’s a very transient person identifying as a wanderer and nomad. An expat by nature, being back in Northern Ireland is probably the hardest thing she’s ever done.

Her blog started as a way of keeping people at home, up to date with her and her husband’s adventures, however, over the last number of years, it has grown into a hodgepodge of things. Las can also be found on Twitter. 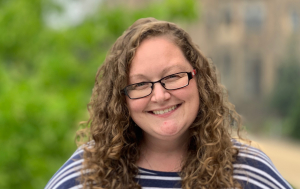 Q: Where are you originally from?
A: Newry, Northern Ireland.

Q: Where are you currently living?
A: Larne, Northern Ireland.

Q: When did you move here?
A: I moved back to Northern Ireland in November 2018.

Q: Did you move alone or with a spouse/family?
A: I moved to Houston with my then-boyfriend, now husband, Colin.

Q: Why did you move; what did you do?
A: The oil and gas company he worked for offered him a transfer and I’d always wanted to live in the USA.

Q: What did you enjoy most about Houston? How would you rate the quality of life compared to your home country?
A: I loved the convenience of Houston. Even though it’s huge and everything is so spread out, you never had to go too far to find what you needed.

Q: Any negative experiences? What did you miss most about home?
A: The healthcare system – it’s prohibitively expensive and I spent every day for over seven years worried that I’d be hit by a car and end up bankrupt. I missed the bread, the cheese and the chocolate (and friends/family of course).

Q: What are the biggest adjustments you had to make when settling into expat life there? Did you experience any particular elements of culture shock?
A: I think my biggest mistake was assuming that America wasn’t too different from where I’d come from. I thought I’d be fine. But Texas is a world of its own and the US varies from state to state. For the first year I didn’t drive, I had no kids to meet parents at school and no pets to meet other people at the dog park – loneliness was my particular culture shock affliction.

Q: What was the cost of living compared to home? Was there anything particularly expensive or particularly cheap in Houston?
A: Gas was cheap – both for your car and for your heating. Designer clothes, bags, shoes, kid’s clothes and convenience foods – all cheap. Electricity (AC all summer!) and fresh fruit and vegetables were more expensive.

Q: How would you rate the public transport in Houston?
A: Non-existent. Public transport isn’t really a thing in HTX. The closest we got was the park and ride to the rodeo every year.

Q: How would you rate the healthcare in Houston? Did you have any particularly good/bad experiences with regards to doctors and hospitals? Are there any hospitals you would recommend?
A: Expensive but second to none. My son was born in Methodist in Sugar Land and my PCP was based in Memorial Hermann. Houston is one of the biggest medical hubs around. If you’re sick – it’s the place you want to be.

Q: What are the biggest safety issues facing expats living in Houston or the USA? Are there any areas expats should avoid?
A: I think every day petty crime in the city itself can be quite high. I disagree with categorizing places with safe or unsafe though – I think crime happens everywhere and criminals are opportunistic. Some of the nicest neighbourhoods in Houston will still have crime. Don’t be a victim. Don’t be careless or stupid and keep your wits about you – that’s not geographically specific, it stands to reason no matter where you live.

Q: How would you rate the standard of housing in the city? What different options are available for expats?
A: I didn’t live in the city, I lived in a suburb called Sugar Land and it was largely family housing. In certain parts of the city, there are apartments and things for single/couples who want to pay a little more for housing but be closer to some of the more popular areas in town.

Q: Any areas or suburbs you’d recommend for expats to live in?
A: Pearland, Richmond, Rosenberg, Katy – they’re all great places to live.

Q: How tolerant were the locals of foreigners? Was there obvious discrimination against any particular groups? Did you ever experience discrimination in Houston?
A: Houston is a melting pot of culture, with a huge expat community. I never witnessed any discrimination, though my husband was once yelled at in subway by a Hispanic lady for not being able to speak Spanish.

Q: Was meeting people and making friends easy? How did you go about meeting new people?
A: Not in the beginning ‘cause I wasn’t driving. Once I was mobile, it was easier. I’m social though – I love people and I make friends easily. I joined my husband's spouses association, and over time I joined two choirs and a self-defence gym so I made some great friends.

Q: Did you make friends with locals or did you mix mainly with other expats? What advice would you give to new expats looking to make friends with the locals?
A: In the beginning, it was mostly expats. But through the choirs and gym, I made a bunch of local friends – which is important if you work in an area with a transient workforce. Col’s company moved people every two years, so my pool of friendship rotated through a few times.

Q: How did your spouse or partner adjust to your new home? Do you think there are any specific challenges for a trailing spouse?
A: In my case, I was the trailing spouse and it comes with a lot of stress and pressure – even if you don’t put any on yourself there’s an external pressure. I didn’t work, I did volunteer though but I got any number of barbed comments about never having worked a day in my life from judgmental friends and family. Being a trailing spouse is harder than being an expat. My husband got to go to work every day and do the job he was trained to do. His daily life didn’t need adjusting to because it remained largely like what it had been in Ireland. Mine was completely turned on its head.

Q: Did your children settle in easily? What were the biggest challenges for them during the move?
A: Lewis was born in Houston. He settled into life in India and here in Northern Ireland very well, though. He still has rough days even now, back over a year and he still asks to go back to India or home to Houston – even though he doesn’t really remember Houston.

Q: What were your favourite family attractions and activities in the city?
A: Houston has so much going for it as a family destination – and it’s centrally located to so many other cities to explore. We loved the children’s museums – both in Sugar Land and in Downtown.

Q: What were the schools like, any particular suggestions?
A: We never used them, but the international schools have great reputations and I know the public schools in Katy are great.

Q: Is there any advice you would like to offer new expat arrivals to Houston or the US?
A: Yeah, buy my book! No, really though, be patient with yourself and take time for YOU. As a stay-at-home mom at the time, my concern with each move has typically been the family unit and keeping cohesion. When it was just Col and me in Houston for the first time I didn’t want to rock the boat or seem ungrateful when I had a bumpy day. I didn’t want the backlash of friends back in Ireland telling me how I couldn’t possibly have a bad day because I was living like a princess. Just because you’re an expat, living an expat lifestyle does not mean you can’t have bad days, too. In India and back here in NI, I was focused on getting things in place for my son, and supporting my husband after he lost his job. It took me a long time to consider my own needs and emotions surrounding each move – don’t put yourself last. You can’t pour from an empty cup and all that jazz. You are important too.

Also, do something scary every day. Take the driving test. Go to the grocery store in the next town over. Put yourself out of your comfort zone so you don’t look back and regret not living life to the fullest wherever you are, simply because of fear. Feel the fear and do it anyway.

► Read about more expat experiences in the USA