Interview with Lisa - An Australian expat living in Turkey

Lisa is an Australian expat living in Istanbul. Her love for this country can be seen in her blog and books on Istanbul and Turkey (Inside Out In Istanbul, Exploring Turkish Landscapes and Waiting for the Tulips to Bloom). She introduces readers to the lesser-known sights and areas of this wonderful city and provides a glimpse into what life is really like there, outside the well-known tourist centres. Follow along with Lisa’s experiences on her blog and on Twitter. 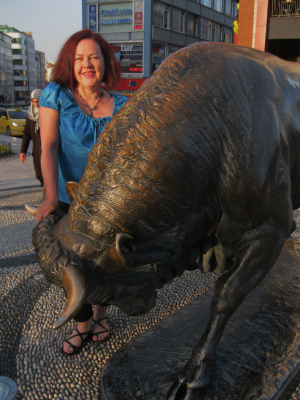 Q: Where are you originally from?
A: Sydney, Australia

Q: Where are you currently living?
A: Istanbul, Turkey

Q: When did you move here?
A: I first moved to Turkey in 2002 for a couple of years then returned to Sydney. I returned in 2010 and lived in Istanbul until 2016 before moving to Lisbon, Portugal. However, I split my time equally between Lisbon and Istanbul in the last year but I’m back in Istanbul permanently now.

Q: Is this your first expat experience?
A: It was originally, but after living in Portugal for over two years being back in Istanbul is like returning home.

Q: Did you move here alone or with a spouse/family?
A: I moved with my husband.

Q: Why did you move; what do you do?
A: Before I moved to Istanbul in 2010 I spent more than a decade flitting back and forth between Australia and Turkey. Each time I went back to Sydney I found less and less to keep me there. Turkey and Istanbul called to me with the lure of close friends, lots of laughter and endless possibilities to explore what the country has to offer, challenge myself and grow. When I first came I taught English at university but now I’m a freelance writer focussing on the clash of tradition and modernity in Turkey and how it often results in something new and unexpected.

Q: What do you enjoy most about Istanbul?
A: I love the dynamism and vibrancy. There’s always something to do in Istanbul. You can eat at a range of restaurants featuring regional specialities, see international art exhibitions, enjoy intimate or arena-size music concerts, walk in a forest or by the sea… the list is endless.

Q: Any negative experiences? What do you miss most about home?
A: Istanbul is a very big city with a huge population. I sometimes feel a bit drained by too much stimulation and have learned to take some time out, whether by staying at home more or going away for a few days. I’ve never felt homesick living in Istanbul. When my father was alive we Skyped frequently but I often found myself wishing he could experience things with me here, rather than wishing I was back in Sydney with him.

Q: How has your spouse or partner adjusted to your new home?
A: I think it’s a lot easier for expat women to make friends and settle into a new routine here than it is for expat men. There are more foreign women living in Istanbul than foreign men and numerous clubs, organisations and informal get-togethers aimed at women. Most Turkish men work long hours and spend their free time with extended family so there are fewer opportunities for expat men to make male friends.

Q: What’s the cost of living compared to home? Is there anything particularly expensive or particularly cheap in Turkey?
A: Fresh fruit and vegetables are much cheaper than in Australia, while wine is more expensive. Luckily I like Turkish food and my husband is a very good cook. His mother was Italian and he’s inherited her passion for food so I’m spoiled for choice. In any given week I can eat Italian, Indian or Thai without having to go out. If you miss those types of cuisines and you do eat out, it can be rather expensive in Istanbul. For those on restricted diets (gluten-free etc.), substitute products are expensive and hard to find.

Q: How would you rate the healthcare in Istanbul? Have you had any particularly good/bad experiences with regards to doctors and hospitals?
A: Healthcare anywhere you don’t speak the language can be daunting, but in my experience, the medical staff in Turkey are very caring. I once had to rush my husband to emergency and so many people there helped us. The doctor he initially saw has become his good friend, and like most Turks, we now ask him for personal recommendations when we need medical care.

Q: What are the biggest safety issues facing expats living in Istanbul or Turkey? Are there any areas expats should avoid?
A: Like all major cities, Istanbul has less desirable areas, however, the main thing to remember is to behave as you would back home. Just because most Turkish people are super friendly doesn’t mean you should go off with a random stranger you meet when you’re out and about. This might sound obvious, but it’s surprising how many people throw caution to the wind when they’re caught up in the excitement of being in a foreign country. That said, there is much less gun and drug-related crime than in some American cities. However, women out on their own will be more comfortable if they stick to asking women for directions or other information, rather than men.

Q: How do you rate the standard of housing in Istanbul? What different options are available for expats?
A: Istanbul has a full range of housing options from share apartments to luxury gated communities. It really depends on your budget, personal preferences and planned length of stay. Things to note are that if you want to rent an unfurnished apartment it means exactly that – no light fittings, window coverings, whitegoods and sometimes no floorcoverings (I’ve viewed apartments with ragged edging running around the walls after the previous tenants cut the carpet out). Winters can get quite cold (compared to Sydney) and older buildings don’t always have good insulation so new builds can be more comfortable and cheaper to heat. Also, you’ll be expected to pay a monthly maintenance fee and this can be very high if you have an onsite janitor, shared central heating, a pool, and so on.

Q: Any areas or suburbs you’d recommend for expats to live in?
A: Again, it depends on personal preference. I like the Kadıköy district (Kadıköy, Ataşehir, Moda, Kozyatağı) on the Asian side of Istanbul because there’s a lot to do in Kadıköy centre – shops, restaurants, bars, theatres, cinemas and so on. However a lot of singles and couples without children like the European side. In areas such as Cihangir, Etiler and Beyoğlu more people speak English, and there are a lot of expat groups to connect with. People with kids like areas further up the Bosphorus such as Bebek, Sariyer and Zekeriyaköy. There are gated communities, generously sized apartments, houses with gardens and easy access to walks by the water or green spaces such as Belgrade Forest and the beaches around Kilyos.

Q: How tolerant are the locals of foreigners? Is there obvious discrimination against any particular groups? Have you ever experienced discrimination in Istanbul?
A: Over the time I’ve lived In Turkey I’ve only come across a few Turks who were unwelcoming. On the whole, they’re warm and friendly. However, Istanbul has the largest number of people displaced by war in the world or fleeing discrimination. Residents of the city are feeling the strain of having so many different nationalities living in an already crowded city. Additionally, people of colour are still relatively rare in Istanbul and I know they find the stares and curiosity about their hair and skin colour intrusive. That said, once you become a local, part of the neighbourhood, people will go out of their way to help you.

Q: Was meeting people and making friends easy? How did you go about meeting new people?
A: Some of my earliest friendships came about through teaching. Turkish students became friends, as did Turkish colleagues. I made other friends through language exchange groups. Now my biggest problem isn’t making friends, it’s having enough time to see them all.

Q: Have you made friends with locals or do you mix mainly with other expats? What advice would you give to new expats looking to make friends with the locals?
A: Most of my friends are locals. When I first moved to Turkey ten years ago there weren’t so many expat groups around, and I already had Turkish friends from previous stays. These days there are regular events in Istanbul such as trivia nights, spoken word events and more that attract a mix of locals and expats, making it easier to make Turkish friends.

Q: Was getting a work permit or visa a relatively easy process? Did you tackle the visa process yourself, or did you enlist the services of an immigration consultant?
A: I’ve never used the services of an immigration consultant because the process of applying for and obtaining a resident permit is fairly straightforward. I’ve done it many times over the years, and nowadays it’s much quicker and less time-consuming than in the past. Early on you had to arrive at the immigration office at 6am to queue to get a ticket that would let you line up to get another ticket to get an appointment, but now applications are done online. You just have to supply the required paperwork, be patient and smile a lot. Work permits are generally tied to a particular job so your new employer has to obtain it for you. How easy it is to get a work permit depends on the experience and efficiency of your employer.

Q: What is the economic climate in the city like? Do you have any tips for expats looking to find a job? Which resources did you find most useful?
A: Turkey is undergoing a difficult time economically and a lot of Turkish university graduates are unemployed. It’s not a good idea to come over expecting to find a job immediately so unless you have a solid job offer, make sure you have enough money to support yourself for a few months. Additionally, the types of jobs foreigners can legally do is restricted. Expats not employed by international companies usually work as English teachers and the good schools require their teachers to have proper qualifications and experience.

Q: Is there any advice you would like to offer new expat arrivals to Istanbul or Turkey?
A: Come with an open mind and don’t expect Istanbul to be like back home. Many people move here after short visits when they spend all their time in well-organised tourist areas and modern shopping centres. Then they make the move and are overwhelmed by culture shock. Even though I’d spent a lot of time in Turkey before I finally moved here, I still found it difficult at times. Readers interested in knowing more, or thinking about taking the plunge, should read my memoir Waiting for the Tulips to Bloom: Adrift in Istanbul to learn more. Despite its enormous size, Istanbul is still very much like a series of villages, each with its own unique customs and quirks. This can be challenging for a newcomer but is much easier to deal with if you accept that the unexpected is the norm.