Interview with Peter – A Danish expat living in Portland

Peter H. Fogtdal is a novelist, poet, human being, ex-astrologer, Beatles-fan, spiritual airhead, American resident and a Danish citizen. Living between Copenhagen and Portland since 2005, Peter is now based permanently in the 'City of Roses', where he writes full time. His published works are presented and explored on his official Peter H. Fogtdal Novels Facebook page, and can be found on Amazon. 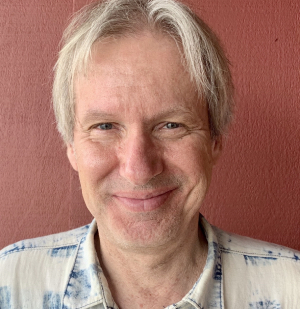 Q: Where are you originally from?
A: Copenhagen, Denmark

Q: Where are you currently living?
A: Portland, Oregon, USA

Q: Is this your first expat experience?
A: I was a college student at University of Florida and Cal State Fullerton as well between 1977-1982. I've also lived in Italy for a few short periods.

Q: Did you move here alone or with a spouse/family?
A: Apart from my toy raccoon, I came here all by myself.

Q: Why did you move; what do you do?
A: I'm a novelist with 14 novels out in Denmark and one novel here in the US called The Tsar's Dwarf. I've also written a poetry collection, My Crimes of Gelato that you should read, but I actually came to Portland because I was invited to teach at Portland State University for two months. Those two months turned into six years. And I'm still here loving my life in the City of Weird.

Q: What do you enjoy most about Portland?
A: I love the Bohemian vibe of Southeast Portland and how friendly people are in Oregon. Most people actually say hello when you meet them in the morning, as opposed to in Copenhagen when they look right through you as if you don't exist. Here in Portland, I live in a very green area with lots of squirrels and the odd raccoon and I can walk to six or seven cafes which is important to me since I write a lot outside my home.

Q: What do you miss most about home?
A: I miss the historical vibe of Copenhagen: the castles, the parks, and the lack of guns but, more than anything, I miss getting on a plane and landing in Northern Italy, Ukraine or Greece after a few hours of flight. I still feel very European in that sense and I absolutely detest peanut butter, American politics, and anchors with white teeth!

Q: What’s the cost of living compared to home?
A: The great thing about Denmark is that it's extremely hard to find a place in the world that's more expensive than Copenhagen. Only Oslo and Zurich are worse, so Portland still seems fairly cheap to me, even though prices have gone up a lot the last 10 years.

Q: How would you rate the public transport in Portland?
A: Great, excellent, very European. We have busses and street cars. In so many American cities, sidewalks are non-existent but here you have lots of them. As I said before, Portland is very civilised. They don't see walking as a weird thing!

Q: What are the biggest safety issues facing expats living in Portland? Are there any areas expats should avoid?
A: I haven't mugged any one lately and nobody has mugged me. Downtown used to be fairly safe but that has changed, unfortunately. People say that SE Portland beyond 120th Avenue isn't safe but I wouldn't know.

Q: How do you rate the standard of housing in Portland?
A: It has become difficult to find good rentals lately. The prices on houses are very high here so as far as I know, it's not that easy finding bargains but I still recommend Portland highly as a place to live unless you're addicted to the sun. The climate ain't fantastic here but still better than Denmark's.

Q: Any cities, areas or suburbs you’d recommend for expats to live in?
A: I would recommend the Inner Southeast and Inner Northwest from around 12th Avenue to 75th. Multnomah Village and Selwood are really nice as well but I'm not a fan of generic suburbs where you have to go to a mall to eat or do your shopping. That's deadly for a Copenhagener like myself so take my opinion with a grain of Scandinavian salt.

Q: Was meeting people and making friends easy? How did you go about meeting new people?
A: Since I started my life here by teaching at Portland State University, it was extremely easy for me to make friends. And as I said before, Portlanders are a friendly lot, but in general, Americans are more superficial when it comes to friendship and they have less spare time than Danes, so don't expect a lot of lasting friendships. People move a lot more than Scandinavians and when you're out of sight, you're out of sight if you know what I mean?

Q: Was getting a work permit or visa a relatively easy process? Did you tackle the visa process yourself, or did you enlist the services of an immigration consultant?
A: The work permit was easy because Portland State University took care of it and I was lucky to get a lot of extensions which is more difficult today. The Green Card process is a royal pain in the ass, unless you're royalty, and yes, I definitely needed a good immigration lawyer with the amount of paperwork a Green Card requires.

Q: What are your favourite family attractions and activities in Portland?
A: Walking at Laurelhurst Park and Mount Tabor, shopping at NW 23 Street and at SE Hawthorne between 32 and 39th street during non-Covid times. Visiting Powell's City of Books downtown. Eating well in the small Indian and Thai restaurants you find everywhere.

Q: Is there any advice you would like to offer new expat arrivals to Portland?
A:  Eat at food carts. Get a bike. Visit the Colombia Gorge and the many mountain lakes in the area (not necessarily on your bike though). Portland is surrounded by beautiful nature and the Oregon Coast is only an hour and fifteen minutes away. This area is absolutely wonderful and don't let the bad press Portland got last year get to you. The riots only took place in a small area downtown. I live less than two miles away and they weren't a problem for 99% of the locals, even though they made international news for months!

►Read more about expat life in America in Expat Experiences in The USA.