It isn’t often that a book manages to take up residence inside your head, determined not to let you rest until you’ve explored every facet, every angle, every detail. In the days and weeks since finishing Paula Lucas’s Harvesting Stones: An American Woman’s International Journey of Survival, I have caught myself turning it over and over in my mind. I revisit scenes, remember conversations, recall red flags, weigh hypothetical options, all in search of an answer to the haunting question, “Could that ever happen to me?” Or worse yet, “What if it did?” 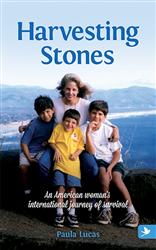 Therein lies the strength of this memoir. Paula Lucas’s story is the stuff of news headlines, full of international intrigue, emotional betrayal, escalating domestic violence and virtual servitude in a foreign land. A sanctimonious few may ‘tsk tsk’ or scratch their heads, copping to a complete lack of understanding as to how Lucas could have gotten in so deep, with so little recourse and nowhere to turn. But the truth is that others will detect a familiar pattern of escalating control which has held a friend, loved one – possibly even themselves – in its grips: the wooing, being showered with affection and gifts, followed by temper tantrums of increasing frequency and severity which give way to tears and promises on both sides of ‘never again’. Until it does.

This cautionary tale of suffering and survival offers us a unique opportunity to understand how a capable, intelligent, educated woman could ultimately find herself the victim of a controlling narcissist who routinely threatens, belittles and beats her and their young sons. Swept up in an exciting romance with a worldly, well-traveled foreign photographer, Lucas brings us along on the journey from starry-eyed young woman enthralled with the attentions and lifestyle lavished upon her to cross-cultural marriage and motherhood, through her husband’s descent into violence, and ultimately to physical and psychological abuse beyond her wildest imaginings.

Readers who live or have lived across cultures will know firsthand that when it comes to affairs of the heart, a loved one’s personal attributes can and often do supersede bewildering cultural differences. In our increasingly globalised world, cross-cultural relationships are growing as more people study, live, work or travel abroad. The rise of such intercultural unions has even led to the coining of the phrase ‘lovepats’, with many happy marriages and families as a result. Unfortunately, as in Lucas’s case, socio-economic, religious and cultural differences occasionally may also help mask serious personality flaws – or worse – until it is too late. In hindsight the signs may have been there, but by the time doubts turned to outright fear, she is trapped. Life becomes a test of survival, protecting her young sons while finding a way out.

Recounted with brutal honesty and with certain specifics changed to protect the innocent from the guilty, this is a narrative which will open your eyes. Sadly, domestic abuse can and does happen everywhere. But differing legal and judicial systems, cultural expectations and inequality in the rights of women and children can conspire to make escape from such abuse in some foreign countries exceptionally difficult. Expats around the world will attest to the underside of cross-cultural life, the whispered rumors of so-and-so being abused by her husband, such-and-such unable to flee. As Lucas fades from consciousness after a particularly brutish attack, she makes a vow: if she survives this decade-long nightmare, she will make every effort to help others trapped in the same manner. Call it fate, karma, or divine retribution, her plea is heard and eventually she and her children are able to flee.

Back on her native soil, the family remains on the run from their abuser who is desperate for revenge. Despite dealing with poverty and homelessness, and with the timely help of family members and friends, Lucas fights to keep her family together and out of the hands of her enraged husband. She also makes good on her promise by founding the much-needed American Overseas Domestic Violence Crisis Center to aid others in similar straits, followed by the Sexual Assault Support and Help for Americans Abroad programme, both of which serve as models for programmes helping such victims from other nationalities.

Terrifying, unimaginable, harrowing, chilling – thankfully this engrossing book ends triumphantly, albeit with the bittersweet aftertaste that comes with searing memories and difficult experiences which cannot be undone. Harvesting Stones is a testament to Lucas’s strength, bravery, tenacity and will to thrive. Her tale is the very hallmark of resilience, and her life’s work is a beacon to those in need around the world.