Interview with Kevin – an American expat living in Ireland

Kevin is an American expat who has been living and working in Dublin for the past four years. Although he misses his family back in the States, the locals, friendly people, culture and scenery are what keep him happy in the Emerald Isle. 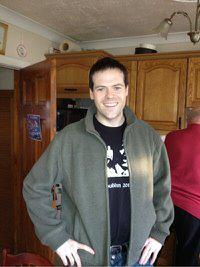 A: Born in Washington DC, lived in Arlington, Virginia until the age of 26 when I moved to Ireland (nearly five years ago).

A:  I moved for an Irish girl of course!

Q: What do you enjoy most about Dublin, how’s the quality of life?

A:  I enjoy being the outsider. I speak and immediately people are curious. I enjoy the people here, the smaller way of life, the culture, the scenery, the proximity to the rest of Europe.

A:  Family and friends. I miss my parents and my siblings, a few very close mates. Thankfully Ireland provides 20 days holidays by law, so I can visit quite often.

A:  Like any major densely populated city, there are very safe and lovely places, and places that are “kips” or slums to us back home. Policing numbers are much fewer than back home, but I’ve not had any problems to this day. Like anywhere, it depends where you go I suppose.

About living in Ireland

Q: Which are the best places/suburbs to live in Dublin as an expat?

A:  Dublin is split between three areas: The city centre, the north side, and the south side. I’ve only lived in the north side (except from one hectic year in the city centre, the slums I mentioned) so I can only really speak for it. I’ve found it to be ideal. The south side is considered by many “northsiders” to be very posh. That’s mainly because it’s expensive. The north side would be cheaper in the way of rent, and personally I love the north side. Unlike the states, the DART (rail transportation) is nearly walking distance from any suburb you’re in. If renting, you can find nearly anything in your price range. From large town houses for one or a family, to a shared accommodation with a few others.

Q: How do you rate the standard of accommodation in Dublin?

A:  Accommodation depends on your budget in Dublin. As I rent, most places are typically furnished. Couches, tables, chairs and even beds are usually standard.

Q: What’s the cost of living in Ireland compared to home? What is cheap or expensive in particular?

A:  I have found Dublin to be much more expensive than home, especially now. The cost of living is quite high, and the government is making more and more cuts each year to deal with the financial situation the country is in. Unlike home, where most pay cheques are padded to deal with the amount of taxes, Irish citizens see less and less of their pay come home each year. Pay wage increases and bonuses have been extinguished, and many struggle. The Irish have always been home buyers. It’s in their blood. Now, some are really paying for it.

On the plus, anyone can show up at an A&E (ER) for emergency treatment and not have to worry about insurance. Depending on where you are, nearly anyone will give you the shirt off their back if you ask for it. A typical pint of Guinness will cost around €5, but tobacco will cost you approximately €10 for one pack. Most groceries are on par with the cost back home.

A:  I don’t mix with any expats to be honest. Not out of choice, but because I just don’t know where they go or meet many. The locals and people are what keep me happy here. The people here generally like Americans, as long as we’re not being loud and typically American. Being loud and arrogant, and comparing something here to something back in the States will never get much of a warm welcome. If you’re nice, curious, and generally want to enjoy the country, you will be treated with compassion you’ve not met before.

Q: Was it easy meeting people and making friends in Dublin?

A:  I’m very social and like to meet new people. I found it quite easy to make new friends. Some people have never been to the States and will ask questions about it all the time. Much like when an Irish person is back in the States. We want to know where they’re from, and then will tell them if we’ve been anywhere in Ireland. The same goes here. “Whereabouts in the States are ya from?" or, "I was in Florida once….”. It’s very easy to meet new people and make friends here.

Q: How would you rate the healthcare in Ireland?

A:  As before, anyone will be treated in an emergency. There’s private insurance groups that you can pay to ensure a nice suite if you have to stay a number of days. However, if you were in need, the state could pick up the majority of the bill.

About working in Ireland

Q: Did you have a problem getting a work visa/permit for Ireland?

A:  My mother was born here making me an Irish citizen. All I had to do was apply for a Irish passport. Once I got that, it’s all about getting your PPS number. It’s exactly like a social security number back home. You need it to set up a bank account, which you need to register for your cable, electricity, and tax purposes. Any job application will request this PPS number. It is vital.

Q: What’s the economic climate like in Ireland, is there plenty of work?

A: At the moment, there is work, but there is an intense amount of competition for it. If you’re willing to look for it, it is out there. Just don’t be put off if it takes a while. Lots of people in this country have been made redundant over the last few years.

A:  I haven’t found the work culture to be much different at all. I’ve only worked in office type environments, and they’re pretty much the same. The professional standard is the same. I will say, the annual leave is spectacular. By law, you must be given 20 paid annual days vacation. This is something the US, shockingly, does not require. That’s unfortunate because it is brilliant.

Q: Is there any other advice you'd like to offer new expat arrivals?

A:  This depends on the person I suppose. If they are thinking of moving here, it is helpful to have an agency or someone you can count on to show you around. Getting your PPS number is like going to the DMV. There are long queues and lots of paperwork, and knowing your way around these places can take some of the stress off.

It will take time to get used to the ins and outs, so allow for it. I once stood in front of a bus stop in the country (middle of nowhere) for three hours watching empty buses pass me at the bus stop. It wasn’t until an Irish local came up to that same bus stop, and PUT HIS HAND OUT to notify the bus driver he wanted to get on. I felt like an idiot. I had assumed standing at the bus stop would mean I want to get on the bus. No, apparently that’s not the case. Seriously, you have to put your hand out to notify the bus driver you want to get on the bus.

Coke or other sodas cost the same as a new one to be refilled. It’s not until the end of the meal when you realise you’ve spent €8 on Diet Coke. It’s those little things where it’s nice to have someone who’s from here or been here long enough to help you out.