Interview with Liene Kukainis – An American expat living in France

Liene Kukainis is an expatriate from the United States living with her family in central France. After earning a degree in forestry and working as a wildland firefighter in the US, she is currently working on raising two boys, learning French, travelling Europe and writing 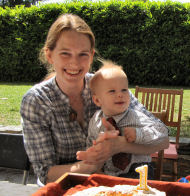 Q: Where are you originally from?
A: Chicago, IL, USA

Q: Where are you living now?
A: Clermont-Ferrand, France

Q: How long have you lived in Clermont-Ferrand?
A: Our family has lived in France for two years.

Q: Did you move with a spouse/children?
A: I arrived in France with my husband and then-six-month-old son.

Q: Why did you move to France; what do you do?
A: We had long discussed an expatriation assignment and move overseas, and when the offer materialised for my husband, it was an easy decision. I’m currently working on raising two boys, learning French and writing my blog, Femme au Foyer.

About living in Clermont-Ferrand

Q: What do you enjoy most about Clermont-Ferrand, how’s the quality of life?
A: Not only is Clermont-Ferrand a vibrant town, but we are within proximity of dozens of exciting destinations such as the Mediterranean, the Atlantic, Paris, Lyon and Bordeaux. With scores of local festivals, historic châteaux, cheese-making farms and vineyards in our backyard, there is always something to do!

Q: Any negatives to living in Clermont-Ferrand? What do you miss most about home?
A: The distance from family is tough, especially the long periods of time our two sons go without seeing their grandparents.

Q: Which are the best places/suburbs to live in Clermont-Ferrand as an expat?
A: It depends on what you are looking for; a family that would like a yard might choose any of the many suburbs with views of the city and the chain of volcanoes, such as Chamalieres or Beaumont, but we chose a smaller apartment instead, opting to be within walking distance of the historic downtown of Clermont-Ferrand, the weekly marches, the jardins and dozens of restaurants.

Q: How do you rate the standard of accommodation in Clermont-Ferrand?
A: Whether looking to rent or own, choices abound. From the small student’s studio to the large house, from updated apartments in centuries-old buildings to the most modern spaces, a home to your standards can be found. Rent in Clermont-Ferrand may be comparable to that in a medium-sized city in the US; however, buying is more expensive.

Q: What’s the cost of living in Clermont-Ferrand compared to home? What is cheap or expensive in particular?
A: Compared to the United States, many things are more expensive, including household goods, clothes, electronics and furniture. However, some staples are noticeably cheaper, such as cheese, bread, dairy products and wine.

Q: What are the locals like; do you mix mainly with other expats?
A: As my language skills have room for improvement, I originally found company among other English-speaking expatriates, but over time our group of friends has expanded to accommodate locals as well. Clermont-Ferrand really has a diverse and international community due to several universities and global companies.

Q: Was it easy meeting people and making friends in Clermont-Ferrand?
A: With a little bit of effort and the help of organisations such as the International Women’s Club, I was able to quickly meet people with similar interests. Having two young children helps (most of my best friends are also mothers), as does an international background; although born in the US, my husband and I both have a Latvian heritage which helps with learning a new language as well as understanding cultural differences.

Q: Did your husband have problems adjusting to his new home?
A: Although the time spent in temporary housing with only the suitcases we arrived with was hard, the challenge of living in France has been an adventure and an ongoing learning process. My husband had already lived internationally prior to this move, and I had lived in a handful of states in the US, and past experiences really helped us in our transition.

Q: Did your children settle in easily?
A: As our older son Lauris was only six months old, and our second was born here, they had a pretty easy time of it.

Q: What are the schools like in Clermont-Ferrand, any particular suggestions?
A: Neither of my children is old enough to start school, but I was interested to learn that whereas kindergarten starts with children aged five in the US, here there is ecole maternelle for children as young as three years old.

Q: Is there any other advice you like to offer new expat arrivals in France?
A: Be flexible, learn the language, and make friends outside of your comfort zone.