Interview with Rory - a Canadian expat living in Hungary 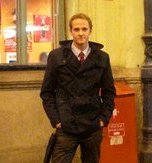 Rory, a Canadian living in Budapest, was wooed by the city’s brilliant balancing act, a phenomenon that places equal emphasis on the post-communist kitsch and the capitalist West. He’s conquered most of Eastern Europe and the Balkans by train, and has now waded through the tedium of the work permit application process to put down roots in Hungary.

A: Grand Forks, BC, Canada

A: I graduated from university in 2009 and decided I deserved nothing less than a year-long backpacking trip through Eastern Europe, the Balkans and the former Soviet Union. I found Budapest to be such a beautiful and vibrant city in a great location for future travel around the region. I gave myself until Christmas to find a job, or return home penniless.

Q: What do you enjoy most about Budapest, how’s the quality of life in Hungary?

A: The fact that you can walk everywhere is one of the best parts of living in Budapest. Central Budapest is one of the well-planned cities I have ever encountered. Most of the key attractions are contained along either sides of the Danube, and within the two ring-roads (Körúts) in Pest, but there is much more outside, as well. The beautiful 19th century buildings and narrow streets packed with shops and cafes make walking anywhere quite enjoyable.

A: Asian food. Five years in Vancouver has me addicted to late night all-you-can-eat sushi, kimchi ramen, dim sum, pho, and so much more. There are a couple of Asian stores here, but not nearly in the breadth or depth that I had become accustomed to.

A: Yes, very. I live in the 8th District, which locals negatively brand as the “ghetto,” rife with crime and persons of ill-repute, but I’ve never felt safer. Even at 4am, walking home alone has never been a concern.

About living in Budapest

Q: Which are the best places/suburbs to live in Budapest as an expat?

A: Jozsefvaros! I cannot recommend my own neighbourhood enough. Rákóczi, with its access to the fresh produce, homemade sausages and cheese from the villages around Budapest. A great place to practise Hungarian, if one is so brave. There are great cafés and hidden garden bars around Mikszáth Tér and places like Máttyas Tér are experiencing rejuvenation.

Q: How do you rate the standard of accommodation in Hungary?

A: I live in a beautiful old apartment building built in 1889, though my actual flat dates back to the 1970s. The wallpaper is a bit drab, the furniture is Socialist, and the appliances bear the proud marker “Made in USSR” – in short, it’s perfect. It’s quite small, but the large living room has a loft where I sleep, and – my favourite part – there is a laundry contraption on the ceiling for drying clothes that raises and lowers by means of a pulley. Very space-efficient.

But for those not interested in reliving the heady glory days of the People’s Republic of Hungary, flats of all varieties are available. One thing to note is that older flats, while stunningly beautiful, come with a price for their high ceilings. It costs a lot to heat up these large rooms in winter, and the old walls do not retain heat as well. I am fortunate that I am surrounded by neighbours who love to overheat their apartments, the overspill of which benefits me. Additionally, as a Canadian, I am naturally inclined towards cold and inhospitable living conditions.

Q: What’s the cost of living in Hungary compared to home? What is cheap or expensive in particular?

A: I have realised that after spending my university days living in absolute squalor in a ritzy neighbourhood of Vancouver, my standard of living has increased immensely, and I am paying half the cost of rent. Some food items are a bit pricier, such as beef, but staples are decently priced. Shop around—sometimes the price of a tomato in one stall is 3 times the price in the neighbouring one.

A: I actually do not have any other expat friends. I was lucky to have fallen into a group of Hungarians who speak perfect English—in addition to French, German, Latin and even a little ancient Greek. For the most part, they speak English better than I do, and while they are more than willing to help me with my Hungarian, I’m hopelessly inadequate at discussing anything complex. So my main interaction with locals in their native languages happens at the markets, typically with old ladies. As such, I’ve picked up a few trademark, old-Hungarian-lady phrases that pepper my speech. I’m okay with that.

A: For me, by pure stroke of luck, it was indeed. If you ask a Hungarian, they will tell you that Hungarians are the rudest people on the planet. But to foreigners, they are nothing short of friendly, polite, and warm. Many young people in Hungary have travelled, interacted with other cultures, and identify as Europeans, so their command of English is excellent and they are open to meeting new people and welcoming them into their homes. I’ve experienced some of the best hospitality here in my travels, and it has only encouraged me to continue my efforts at this language.

About working in Budapest

Q: Did you have a problem getting a work visa/permit for Hungary?

A: Ooooh yes. From my hire date to my first day of work was two and a half months, spent agonisingly waiting each day to hear if my permit had been approved. I needed to submit my original university degree to the Ministry of Labour, which required having it couriered to me. The long queue at my university’s registrar’s office was made a bit shorter due to my having friends on the inside (friends who in the meantime emailed me a letter from the registrar stating that I had indeed gone to UBC, what I had studied, and that I had indeed graduated. I handed this letter over to the Ministry, but they told me they were waiting on the degree). Degree submitted, I continued to wait. And wait. And wait. In the meantime, I took trips to Serbia, Romania, and Ukraine, always rushing back concerned that I would get the call. To no avail. News came that the Ministry of Labour was being dismantled and folded into the Ministry of Immigration—no doubt contributing to confusion, lost paperwork, and I suspect disgruntled employees not totally keen on processing a work permit for a foreigner when their own jobs were in peril. Finally, in late November, I did receive a call…telling me that my degree had been rejected. My degree, from one of the best universities in Canada, which I spent $100 to have reprinted and couriered to me, was not good enough for the Hungarian Ministry of Labour. Of course, you can guess what was good enough for them: the letter, emailed to me for free, that they had originally rejected. Assuming that it would take another three weeks, I took a quick trip to Albania to visit a friend. I was checking my email in a small town in Macedonia when I got the notification that my papers had processed, and I was ready to start work. Hopping aboard a slow, slow northbound train back to Budapest and the EU, I was ready to start the chapter of my life that involved paying taxes and contributing to the Hungarian pension scheme.

Q: What’s the economic climate like in Budapest, is there plenty of work?

A: Long a crossroads between all cardinal compass points in Europe, Budapest is a hub of activity. Today, major Western companies have located their shared service centres (SSCs) here, and have established regional headquarters for their eastern European and Balkan operations. Job postings usually require English, but many call for more specific languages like Dutch or Norwegian. Randstad, Manpower, and Kelly all have offices in Budapest, and post jobs specifically targeting foreigners.

Many Hungarians are also looking to improve their conversational and business English (or other languages. Check out the Budapest group on Couchsurfing.com), so you could make your way as a private tutor as well.

A: Indeed. Showing up on my first day of work in a dress pants and a tie, I was quickly ridiculed by my much more casual and “comfort-oriented” co-workers. Additionally, I’ve never heard so many swearwords uttered so loudly by so many people in an office before. Not at each other, of course, but at their computers, usually MS Office programs like Excel or Outlook bearing the brunt, and no love whatsoever for systems software like SAP.

A: Yes, which helped immensely. There are several in the area. I spoke with another Canadian who spent her own money and a year waiting on a permit, only to be rejected. While it’s easy for EU citizens to simply move here and start working, Canadians and Americans would do best to get hooked up with a company that will cover their paperwork fees. I’ve also heard it is possible to work without a permit, but I wouldn’t know anything about that because I’m a good law-abiding citizen who would never dream of cheating the Hungarian government.

A: Meet the locals. It just may happen that you are travelling through the Caucasus and meet a Hungarian whom you casually mention to that you would like to live in Budapest. He may offer that you stay at his apartment while he is gone, and then when you meet his family, they may help you find a new apartment and call a few friends, leading you to an interview and a job. If it happened to me, I have no doubt than anyone else can do this as well. And if you end up with a job you never saw yourself in, it connects you to the business community and opens you up to new possibilities and contacts.

On the non-work side of things, open up and be brave about the Hungarian language and exploring Budapest. Hungary isn’t Western Europe, it’s not the Balkans but it’s not fully Eastern Europe either. It’s unique, and it has so much to offer people who are willing to scratch beneath the surface. While a lot of the city is undergoing renovations that are bringing fast food chains, malls, and other generic markers of Western capitalism to this ancient capital, there are a lot of hidden gems that date back to the socialist era and before. It’s best explored on foot, so make sure you have comfortable shoes, and find your own favourite spots in the city.

> Are you an expat living in Hungary? We'd love to hear your story. Open the questionnaire here, copy into an email and send it back to info@expatarrivals.com See it all.