Interview with Doug - An American expat in Uruguay

Doug is an American expat living in Uruguay with his wife. He shares some of his insights on expat life in the country and offers advice for new expats looking to make the move. Follow his adventures on his blog, My day in Uruguay. 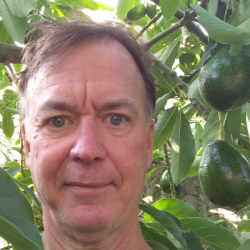 A: The United States, east coast. Lived in southern California a couple years as a kid; worked in England, Malta, and Germany.

Q: When did you move to Uruguay?

A:  My wife and I have had a book publishing company since 1985. By the early 2000s, publishing had become portable, and developments in the US were making me increasingly uncomfortable. We moved to Mexico, but never quite felt comfortable there.

Q: What do you enjoy most about Uruguay? How would you rate the quality of life compared to the USA?

A: Atlántida is a beach town, with a pleasant “suburban” feel. The year-round population is growing, but still many houses stand empty outside of the summer season: late December – early March. It has two year-round supermarkets (yes, that is a big deal!) and offers convenient access to the airport and Montevideo. Punta del Este is less than an hour away.

A: I don’t think of home as being anywhere other than where I live now.

Uruguay tends to have shoddy goods at high prices. The flip side has been a refreshing lack of consumerism – now unfortunately changing.

In fact, many of the negatives in Uruguay have flip sides: it’s nice that it’s laid-back, but sometimes a person wants to actually get something done, now, correctly. Food tends to be predictable and bland, and seafood surprisingly limited, but for the most part, it’s local and fresh. There are now more dining options than when we arrived, but even in Montevideo you can’t say, “Hey, let’s go out to eat – should we have Thai, or Chinese, or Tex Mex?” The answer is, “None of the above.”

Q: What are the biggest adjustments you had to make when settling into expat life in Uruguay? Did you experience any particular elements of culture shock?

A: Again, Uruguay is home. Electronics, plastics, and anything with a motor are startlingly expensive to someone arriving from North America. Medical insurance and treatment are very reasonable. Gasoline and electricity are very expensive, but you can get a split rate for electricity, and how much gasoline do you need? It’s a small country. We have averaged 7,000 miles per year in our car the last eight years.

A: In Montevideo, you can certainly get by without a car. Here in Atlántida, because it’s a year-round town, you can as well, calling a taxi for a ride home from the supermarket. Fletes (cargo vehicles) are easily available for transporting bigger items. Buses are frequent and frequently crowded. Some intercity buses have wifi. There are several options for getting to Buenos Aires by bus and boat, and the airport is new, small, and easily navigable, making arrivals and departures relatively pleasant.

Q: How would you rate the healthcare in Uruguay? Have you had any particularly good/bad experiences with regards to doctors and hospitals? Are there any hospitals you would recommend?

A: I wouldn’t exactly call it “health” care. Modern medical treatments and equipment are available. However, the doctors I’ve encountered pass out prescriptions – especially for antibiotics – like candy. After one outpatient visit for what turned out to be gout, the doctor gave me a prescription for antibiotics “just in case.”

After some blood work, another doctor wanted to put me on statins, immediately, for the rest of my life, with no discussion of possible lifestyle changes. When I went for a driver’s license medical, I took the same results, out of curiosity. That doctor immediately started writing prescriptions – based on two-year-old blood tests! In neither case was there any discussion of causes; just pills.

Most expats join a “mutualista” private medical plan. Outside of Montevideo ambulance service may or may not be included, requiring a separate service which also includes house calls. One interesting observation is that you will rarely see an ambulance in a hurry in Uruguay, because all have a doctor on board, so absent internal haemorrhaging there’s no particular urgency.

Q: What are the biggest safety issues facing expats living in Uruguay? Are there any areas expats should avoid?

A: Assaults and personal robberies occur, mostly in Montevideo, where half the population lives, and not just in “bad” neighbourhoods. In general, I’d say the country presents relatively few safety issues for someone who makes a habit of being alert. House break-ins are common.

Q: How do you rate the standard of housing in Montevideo? What different options are available for expats?

A: Since I don’t live in the city, I’ll leave that for others to answer. Long-term rentals where we live are mostly apartments. The standard is tiny rooms and tiny kitchens, and inadequate heating and insulation by northern standards. Humid, cold winters can be quite uncomfortable and mould is a problem in an uninsulated house or apartment. Electric heaters are expensive to use, and propane heaters generate moisture as well as heat, potentially making mould problems worse.

A: The Atlántida area offers easy access to Montevideo and the airport. It has two large year-round supermarkets, beaches, and a generally pleasant vibe. Punta del Este and Piriapólis are also favourites outside of Montevideo.

A: Locals are generally friendly and tolerant of foreigners. There is no obvious discrimination; Uruguay is a secular country and a leader in human rights.

A: At the time we moved here, there were several English-speaking lunches per month, where we met many expats and quite a few Uruguayans as well. Unfortunately, now there is only one I’m aware of, in Punta del Este. Because of our then-22-year-old son, we met some wonderful local kids and some of their parents, whom we still see from time to time, even though our son has been back in the States now for several years.

A: We work at home, are of retirement age and do not have specific social needs or interests. Socially, we mix mainly with other expats. In Montevideo, there are more social functions, usually announced on a couple of Facebook groups. Worth noting: Uruguay has a zero tolerance law, so driving somewhere to meet for a beer or two has potentially grave consequences.

As anywhere, the key to meeting people and making friends is to get out, be active, have interests, do things. It’s no doubt different for younger people, but a retiring American executive, who worked exclusively with Uruguayans and made many friends here, told me that he was amazed that in seven years, he had never once been invited into an Uruguayan’s home. That, I expect, would not be the case in Argentina, Brazil, or Chile!

About working in Uruguay

A: For most people who will read this, a three-month visa, renewable once without leaving the country, is issued upon arrival. For residence, we did hire a facilitator.

Q: What’s the economic climate like in Uruguay? Do you have any tips for expats looking to find a job there? Which resources did you find most useful?

A: Absent in-demand specific skills, Uruguay is generally not a good choice if you need to find employment. I go into more specifics on the “Uruguay Insights” page on my website.

Family and children in Uruguay

A: I’ve been told that the public schools used to be good, but no longer are. Public elementary students go to school only four hours a day. In Montevideo, there are good American, British, and German private schools.

A: When you move to a place, consider it your home, regardless of how long you plan to stay. Consciously or unconsciously holding the thought that “this is not home” will only make everything more difficult. Accept; be here now!