Interview with Maryanne - an American expat living in Egypt 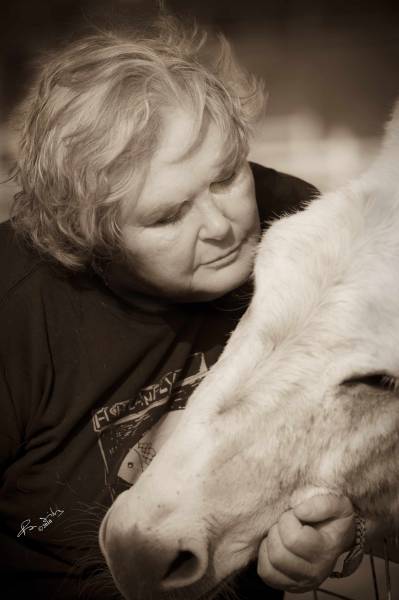 Maryanne Gabanni is an American expat living in rural Egypt. She has lived in the country for many years and is therefore a veteran expat in Egypt. Maryanne owns and runs a farm that provides educational programmes, dealing with basic animal care, farming, and so on to more specialised things on organic farming, permaculture, rural Egyptian ecology. Read on to find out more about her expat life in Egypt.

A: I was born and raised in Southern California but moved to Canada in the early 70s. Loved Canada and took citizenship there. Met my late husband when we were both grad students at the University of Waterloo and our kids were born in Toronto. We moved to Egypt in 1988.

A:  I live on a farm in what would be called a suburb anywhere except Egypt. I live in the villages just north of the pyramids of Abu Sir, south of Giza.

A:  I moved to this area, bought land and built my farm about eight years ago. Prior to that I’d been living in Maadi, a southeastern suburb of Cairo, for about ten years, and in Alexandria for five years before that.

A:  I moved to Alexandria from Toronto in 1988 with my husband and two kids. When they were in middle school, his work was taking him to Cairo a lot and the schools were better in the capital, so we moved to Maadi, where the kids went to the American school. When they graduated they travelled to the US to attend university in New York, and my husband died in an accident in 2000. I stayed on to sort out his businesses while my kids were in university, but after four corporate years, I decided it was time to move out of the city.

A:  Initially we came to Egypt because the businesses that my husband had started were taking him away from the family in Canada too much of the time. Once we were here, we moved around as was necessary.

Q: What do you enjoy most about Egypt, how’s the quality of life?

A:  Cairo/Giza is the world’s largest open-air insane asylum, especially since 2011. It’s vibrant, unpredictable and everything in the world happens here. That said, I live in a rural area outside of the city and find it perfectly wonderful. I grew up in a rural area in Southern California, so rural Egypt wasn’t all that different in some ways.

A:  This is home.  I don’t miss anything. I have an active social life, can ride my horses year round, grow my own vegetables and raise goats to help the local farmers improve their breeding stock. We also have organised a mobile veterinary programme in the area with The Brooke Animal Hospital and The Donkey Sanctuary to provide free veterinary services for the local Egyptian farmers.

Q: Is Egypt safe? Are there any areas expats should avoid?

A: Most of Cairo is quite safe as long as you look four ways before crossing a road. You hear a lot about a lack of security since the revolution, but I haven’t really noticed any difference. Out in my area, it is totally safe since everyone knows everyone else and we all watch out for each other…rural life at its best.

A: The Cairo Metro is very efficient and useful. Taxis are relatively cheap and very plentiful. There is no public transportation outside of the city and I do own a car. Locally bought cars are a bit expensive.

A:  Healthcare has many of the same issues worldwide. We have some excellent doctors in Egypt and some excellent hospitals….just like anywhere. The nursing leaves something to be desired and someone having to spend time in a hospital would be well-advised to have a knowledgeable friend along. Access to diagnostic procedures is readily available and the fees are very reasonable. Three years ago I had a double knee replacement done here and had no problems at all.

About living in Egypt

Q: Which are the best places/suburbs to live in Egypt as an expat?

A:  Choosing where to live in Cairo is very much a matter of the logistics of moving around the city. The satellite cities are less polluted and if you can be working there as well, they make a good choice. There are some good schools in the 6th of October area, and in New Cairo near the airport. The American School and the French School are in Maadi, which makes that suburb very popular with parents of school-age children. If you are young and social, many people like living in the downtown areas of Dokki or Zamalek.

Q: How do you rate the standard of housing in Egypt?

A:  Housing in Cairo varies from amazingly bad to simply amazingly good. You can go funky and native with an older apartment or you can rent an old villa. There are many modern apartment buildings in the city with all the modern amenities. Most people in Cairo do live in apartments. It is one of the most densely populated cities in the world.  Most homes do not have central heating which means that they can be rather chilly in the winter (which is very short!), and they do have air conditioning for the summer heat.

A:  Egypt has been very cheap compared to Europe and North America in many respects. Some things are more expensive, like imported junk food, which to my rather picky frame of reference, is just fine. Meat is more expensive here but fruits, vegetables, and basic foods are much cheaper and of wonderful quality. Egypt manufactures a lot of the clothing sold outside the country so the outlet stores are a real bargain. You can find pretty much anything you really need here.

Q: What are the locals like; do you mix mainly with other expats?
A:  Most of my friends are either locals or they are long term residents like myself. I do have clients and friends who are expats (my farm is an educational centre where people can do horseback riding, play with animals, have picnics and so on), but it is always hard when they leave, as they so often do.

A:  By the time I moved to Alexandria from Canada, I’d moved cities within the US and Canada enough times that I had a routine. I found social groups for women in Alexandria and got to know people there. I never have had any problems finding friends.

About working in Egypt

A:  As the wife of an Egyptian I had a residence visa, but it didn’t permit work. That said, the authorities here were pretty lax about enforcing things, so I worked anyway.  Getting a working residence is somewhat more difficult and is usually taken care of by an employer.

Q: What’s the economic climate like in Egypt, is there plenty of work?

A: There are a lot of things that need doing/making/providing in Egypt.  As well, with language skills, training from North America and Europe can make an expat very desirable as an employee. However, being able to speak Arabic is also very important and many expats can’t do this.

A:  I’d have a problem answering this because most of my corporate experience was at the managerial level and under bizarre circumstances. There are many cultural differences that affect expats in the working environment. I work with a group here that does orientation training and it takes a few hours to talk about them all.

A:  Oddly enough, as a returning Egyptian, my husband was more frustrated by Egyptian culture than I was. For me it was mostly an adventure. He had more invested in the cultural aspect.

A:  For the most part, yes. Egypt is a much less controlled environment than Canada (no liability insurance) so they were able to do all sorts of things that simply were not likely or possible there. As well, the life in the city is multicultural and filled with opportunities for meeting all sorts of people, eating every sort of food, and enjoying music from all over the world. Egyptians like children and are very easy going with them.

A:  There are a wide variety of schools in Cairo or Alexandria and you need to find one that fits your budget and family culture. This may take some time but it is worth the effort. Cairo American College, the Maadi French School, British International School in 6th of October, The German School in Dokki, are just a few of the available choices. There are also groups of families that are homeschooling.

A:  Remember that this is an adventure. Egypt isn’t like anywhere else in the world and you need to put on your sense of humour and proportion with your socks every morning.  Learn Arabic as soon as you can so that you can realise that most of the things people are saying to you are actually very nice. Get out and experience the street theatre that is Cairo.