Paris, Paris: Journey Into the City of Light

Every visitor to Paris brings with them such a weight of expectation that the city can only fail to live up to it. After all, through little active encouragement of its inhabitants, Paris is the purported global capital of cuisine, romance, lights, and that certain French style and attitude many of us secretly aspire to. 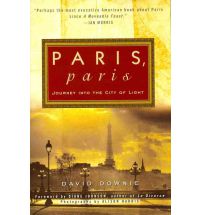 The problem is that the ‘real’, and arguably more charming, Paris is smothered in the familiar tourist charade acted out by some 70 million visitors per year. To some, the discrepancy between the idealised expectation of the city and its vivid reality can be truly disturbing. Psychiatrists have even identified a condition - “Paris Syndrome” - which is specific to Japanese tourists that cannot reconcile their highly idealised vision of Paris with its gritty truths.

So what is a tourist to Paris to do? Can there be another way, an alternative to queuing for hours to enter the crush of the Louvre or Eiffel Tower; a high road away from the harried tourist experience to a more satisfying encounter within this most beguiling of cities?

Well, David Downie just might be your man. His new book Paris, Paris: Journey Into the Ciy of Light, is that long-awaited guide to a more satisfying and memorable experience of the Paris locals know and love.

In contrast to the breathless inventory of attractions catalogued in most guide books, Downie’s writing reveals the city through its stories and characters, providing a far richer and more useful tool to scratch below the city’s surface, alternating between the grimy and the glitzy.

Downie takes the reader into his confidence, sharing Paris’ intimate details and nuances in a refreshing, often humorous, and entirely affectionate manner. His writing is comfortable and accomplished, and his observations refreshing and original. The book is structured into self-contained essays and anecdotes, classified into three sections – Place, People and Phenomena – and so can be easily picked up and enjoyed in episodes.

For expats living in Paris or planning a move there, Paris, Paris: Journey Into the City of Light is a hugely rewarding read and possesses that power of all worthwhile travel books - the facility to transform and deepen one's experience of a destination.

► Read more about David Downie in this Interview with Expat Arrivals

► Find out more about moving to Paris and France