Interview with India - an American expat in Taiwan 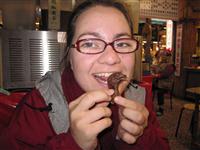 India, from California in the USA, travelled to Taiwan to teach English and stayed for two years while maintaining a blog about her experiences. Read India's advice about the best areas to live in Taipei, the cost of living in Taipei compared to LA and the standard of healthcare in Taiwan.

A: I grew up in southern California.

Q: Where did you live?

Q: How long did you live in Taiwan?

A: I wanted to live in another country, and in Taiwan I could make a decent living teaching English.

Q: What do you enjoy most about Taiwan? How's the quality of life?

A: Coming from California, I'm in awe of the public transportation: I can get around the city, I can get out of the city... I can do anything! I also love the ubiquity of tiny restaurants.

The cost of living is very reasonable, and I don't have any problems with cleanliness or anything. After LA, it's like paradise with slightly subpar architecture.

A: I hate the tile buildings. They're so tacky looking.

A: I never felt unsafe there.

About living in Taiwan

A: In New Taipei City, Banqiao is pretty well-regarded because it's not very far out and is well-served by the public transportation systems. Muzha is a little further out but more pleasantly green and spacious, and also has a university or two with good Mandarin programmes. Danshui (or Tamsui, as they're trying to insist it should be romanized) is a really charming district, along with Beitou.

Within the city itself, I really enjoyed living in Datong: I was very close to an MRT hub and the buses going into and out of the city were very convenient. It's a little bit older, though, and most older expats live in Shilin and Tianmu.

I would basically live anywhere but Wenshan, Nangang or Neihu. They're just too far out.

Q: How do you rate the standard of accommodation in Taiwan?

A: I'm not picky. I saw a few places before I chose my first apartment that were a little shocking in terms of how dirty they were, but then I found out that it's standard to clean when you move in, not when you move out. I liked both places I lived, although the first was definitely nicer and more spacious because it was not in Taipei City.

A: The cost of living is much cheaper than at home. Even with occasional travel around the island and outside it, I managed to sock away a sizable amount of money. Food (good food!) is pretty cheap, and shopping for it in the street markets is very pleasant. Western food items are a little more expensive, and quality electronics are about the same as at home.

A: I found most people very friendly and prone to complimenting the slightest hint of Mandarin ability. I felt comfortable asking most people for help when I needed it to get around or conduct daily business.

A: I found a fun group of people in the China Hash (chinahash.org), part of an international running and drinking club. There was a good mix of expats and locals, and it really brought me out of my shell..

Q: What are the schools like in Taipei, any particular suggestions?

A: From what I could tell as a cram school teacher, they're pretty high-stress environments. There doesn't seem to be a stigma attached to earning good grades and being a good student, though, and that is not a bad thing!

Q: How would you rate the healthcare in Taipei?

A: Absolutely fantastic for the basic stuff, which was all I ever needed. I recommend going to smaller clinics rather than hospitals. There are a lot of extra charges tacked on there...

A: Be very sure of your bank. There are relatively reasonable charges associated with sending money home, but when I went home and my visa ran out, I think something happened to my bank account, which was remaining open in order to get my tax refund. Also - learn the language.